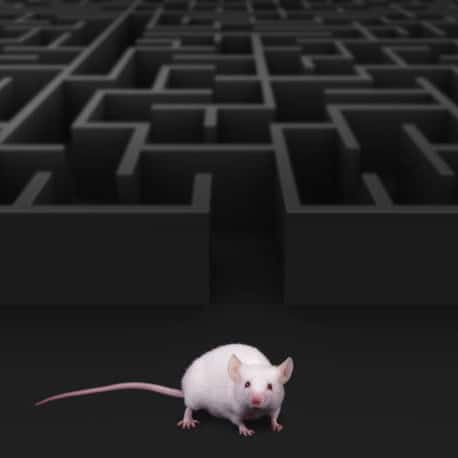 Once there was a mouse who’d been trained to run a maze.

He knew that somewhere at the end of those corridors, there was a piece of cheese waiting for him. And he was always hungry.

So he obediently set his nose to the ground and ran the maze as fast as he could to find the prize.

Then one day, he ran the maze and there was no cheese at the end.

The mouse searched every turn and retraced his steps, but there was nothing.

He grew furious. Hadn’t he done everything that was asked of him? Hadn’t he always figured it out? He had found his way to the end of the maze, and the cheese he deserved ought to be there.

And so the next time the mouse was placed in front of the maze, he refused to run. He wasn’t going to work without a guaranteed payoff.

The mouse looked warily at the maze. He couldn’t tell by looking if there was cheese at the end or not. He wanted to know what was waiting at the end, but he just couldn’t know until he got there.

The Maze Maker looked at the indecisive mouse and said, “I’m not going to tell you whether the cheese is there or not. It might be, it might not. The question is: do you want to find out?”

The mouse searched his heart and found that yes, he did want to know what waited at the end of this particular maze. And because he wanted to find out what was at the end, there was nothing to do but run it and see.

The mouse realized that running the maze was a lot more fun when he enjoyed the feeling of the wind in his fur. He was miserable pinning his happiness on a prize that might not be there at the end.

So the mouse gave himself over completely to the maze, for the joy of the race and the miracle that he could choose to run it.