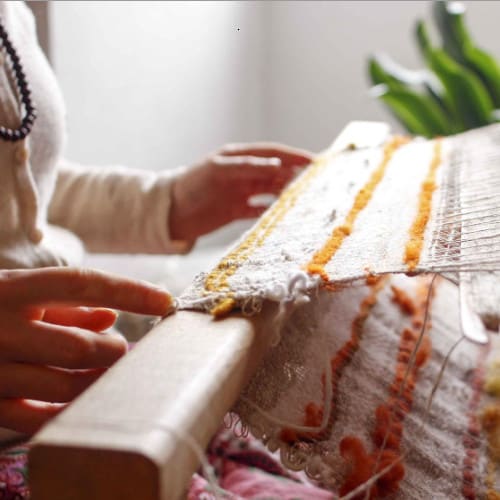 Once there was a weaver who was known in her village for being a little unruly.

Her work was beautiful (the villagers said) but she had a rebellious nature.

When the weaver lost herself in the weaving, her fingers flew across the loom and her insides leapt with excitement to see what would emerge next.

She might choose colors such as the red of ripe berries or emerald pine needles, and blend them with electric blues and vibrant yellows that had never been seen in nature. Her weave might feel soft as a newborn or rough as dried hay.

People stood over her loom to criticize.

“Too much color. Much too bold!”

“Foo yah. This is not the traditional style.”

“What is this? It makes no sense. No one will buy it.”

Over time, the weaver began to doubt. Perhaps she should use more muted colors or emulate the work of the elder weavers.

When she looked at what the other weavers in the village were doing, it was clear that her work was different. In fact, it was wrong.

So the weaver began to hesitate. She would deliberate for hours before settling on just the right thread. The more she worried, the less she wove, until finally she stood paralyzed and immobile before her loom.

The villagers shook their heads. “That’s what happens when you break the rules.”

The weaver cried herself to sleep that night. She had once been so happy losing herself in weaving, and now she could not weave at all.

That night the weaver had a dream.

The weaver saw her fingers as a blur moving across the warp. Faster and faster she wove, and it was impossible to see what she was doing. Finally, her hands came to rest and she was done.

The weaver stared at her work. It was chaotic and ill-made, with no discernable pattern. She wept in frustration.

How could this weaving feel so good, and yet yield something so ugly?

“Do not despair,” came a small voice.

The weaver looked down to see a strange black bird with a red bill. “You’re standing too close,” the bird said. “Close your eyes and back away from the loom.”

The weaver wiped her tears and did as the bird said.

“Further,” the bird said. “Step back even further.”

When the weaver had retreated to what seemed a very far distance, the bird told her to stop.

The weaver opened her eyes and saw before her a gigantic tapestry. It was an ocean of color, with fish leaping from the water and flying in the air. The sun and moon circled in a luminous dance.

The design on the tapestry was so large that no one could make sense of it up close. But from a distance, she saw that it was a masterpiece.

Suddenly the weaver awoke from her dream, knowing what she must do.

From that day forward, she worked the loom with nary a thought for the outcome. She simply followed her fingers and did what they told her. The colors and patterns came without trying or thinking.

She knew that each weave was her perfect gift to the world, the work of her heart, which could not be known until it was completed. Her only task was to show up and let the tapestry weave itself through her.